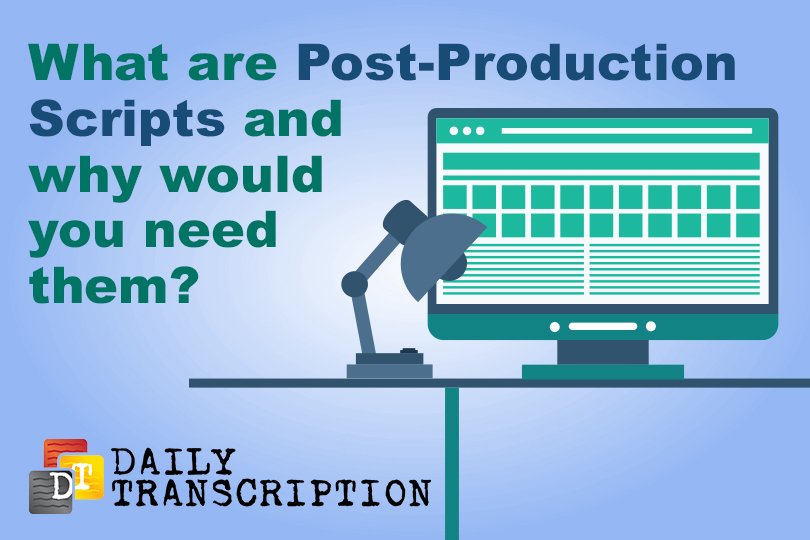 There is a myriad of reasons that a film or TV show would need to utilize a post-production script, from using it to create word-for-word dialogue to preparing it for foreign language subtitles to recording camera angles and action within the production. Creating these details can be time-consuming and laborious for any production team to pull together, which is why many directors turn to a professional transcriptionist to facilitate the process.

Here are the four main categories of post-production scripts you may need to create depending on your production goals:

With a dialogue list, you’ll save time and money as you will already have a working list that your translator can work from. This will eliminate any errors from occurring during the translation process as a translator is able to easily and efficiently translate your film or TV show into the language of your choosing.

A continuity list has multiple purposes, such as serving as a detailed outline of your production for the purpose of subtitling, closed-captioning and dubbing, or as a legal description for copyright purposes. There are four types of continuity lists to choose from, depending on the level of detail you need:

• Spotting List – includes actual subtitles, along with character names, calculated duration of dialogue, in and out times.

• Combined Dialogue and Spotting List (CDSL) – includes all spoken dialogue, scene headings and changes, slug lines, along with all the elements of a Spotting List

• Combined Continuity and Spotting List (CCSL) – the most comprehensive continuity list, it provides complete details of every camera shot or scene within your film or TV production as well as the characters’ names and location during these scenes. This is in addition to the complete dialogue of each actor and any other details that may be needed to present your production.
A CCSL has both the continuity list and the spotting list listed side-by-side within one document. This allows for cross-referencing between dialogue and scenes. Because a CCSL has a great amount of detail, they can be a burden for production companies to develop but are a requirement of the studio.

During a reality TV or documentary production, a great deal of camera footage is captured. Editing this footage down into usable information can be overwhelming and time-consuming for a producer. To capture the exact footage and dialogue needed to create those pivotal moments, a producer may have a transcriptionist transcribe all of the footage for editing purposes into a reality TV/documentary drama transcript.

With a reality TV/documentary drama transcript all spoken dialogue is recorded from raw footage and field taps. This can help speed up the editing process as you are able to locate those exact moments you wish to use within your production. The hours upon hours of film can be boiled down into the few minutes of dialogue that you need to make your reality TV or documentary complete.